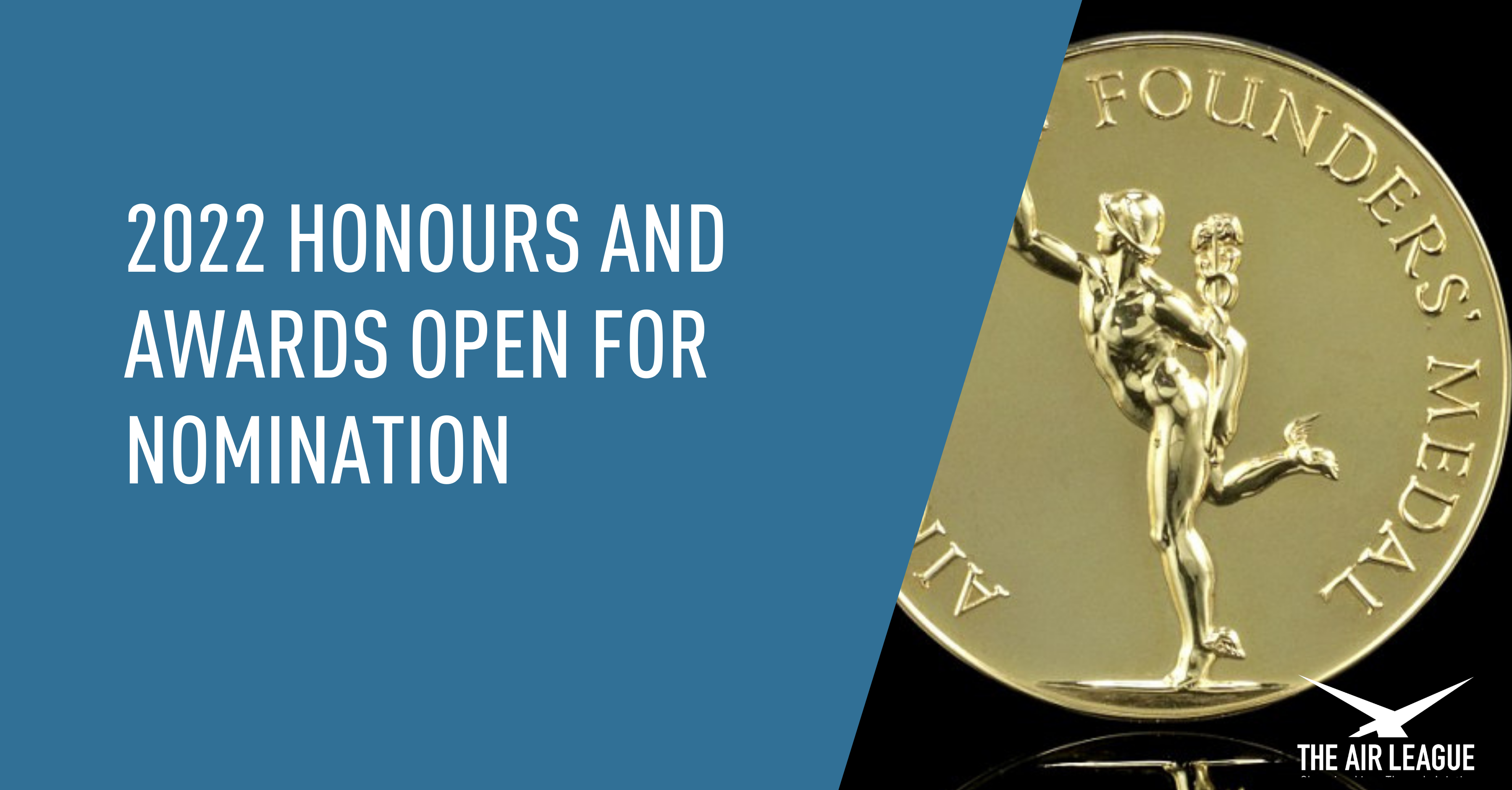 2022 Honours and Awards open for nomination

For over a century the Air league has also presented honours and awards to individuals and organisations who have made an outstanding contribution to aviation and aerospace in the United Kingdom, as well as significant achievements globally. The awards are presented at the Air League’s Annual Reception, usually held at St James’s Palace or the Palace of Westminster each Spring.

Honours and Awards are now open for nomination, with the deadline for submission Friday 15th April.

Honours and Awards presented include:

The award was the gift of the late Mr Stephen Marples, co-founder of the Air League with Colonel H S Massy in 1909. Since Mr Marples’ death in 1972, the medal has been funded by the Air League. Established 1960. Struck in hallmarked silver-gilt by Spink & Son.

The medal is awarded for the most meritorious achievement in the whole field of British aviation or reaching its culmination during the calendar year under review.

Archives from the Aerial League of the British Empire note the first original Gold Medal recipient was Claude Grahame-White in 1910. Established in 1910 until an unknown date, re-established in 1998. Struck in solid gold by Bentley & Skinner.

The medal is awarded for outstanding service to the causes of the Air League.

Companionship of the Air League

Companionship of the Air League is the League’s highest order for an individual and was founded under the presidency of Air Chief Marshal Sir Michael Knight in 1996.

Over the past 25 years only 17 individuals have been elected and at any one time there can only be six companions. There are currently three living companions. The first Companion of the League was Sir Frank Whittle in 1996.

Companionship of the Air League is bestowed to individuals for whom this special distinction seems to be the most appropriate form of recognition following outstanding achievements within aviation and aerospace over a lifetime.

The Jeffrey Quill medal was established in memory of Jeffrey Quill OBE AFC, a British test pilot who served on secondment with the Royal Air Force and Royal Naval Volunteer Reserve during the Second World War. He was also the second man to fly the Supermarine Spitfire  As chief test pilot, Quill test-flew every mark of Spitfire. Quill’s work on the aircraft aided its development from a promising but untried prototype to become, with the Hawker Hurricane, an instrument of the Royal Air Force’s victory in the Battle of Britain. The Spitfire later played a leading role in gaining Allied air superiority over Europe.

Established in 1997. Struck in hallmarked silver-gilt by Spink & Son. The medal is awarded for an outstanding contribution to the development of air-mindedness in Britain’s youth”.

The Scott-Farnie Medal was established in memory of G R Scott-Farnie. Group Captain George Rowland Scott-Farnie was Managing Director of International Aeradio Ltd (Now part of Serco Group Plc) and a council member of the Air League at the time of his sudden death.

Established in 1969. Struck in hallmarked silver-gilt by Spink & Son. The medal is awarded to recognise work in the field of air education.

The Marshall of Cambridge Medal

The Marshall of Cambridge Medal was established by the then chairman, Sir Michael Marshall. Established in 2002. Struck in hallmarked silver-gilt by Spink & Son. The medal is awarded for exceptional support of the Air League by a recent scholarship winner.

The President’s Meritorious Service Award was established by the then Vice-Chairman Group Captain Terry Holloway. Established 2017. Framed address and lapel pin. The award is given to recognise the considerable work and contribution given by an individual to the Air League over a number of years

Established in 1998, produced by a Calligrapher. Framed addresses are awarded to individuals or organisations who have shown an outstanding contribution to aviation and aerospace.

A full list of past award recipients can be found here.