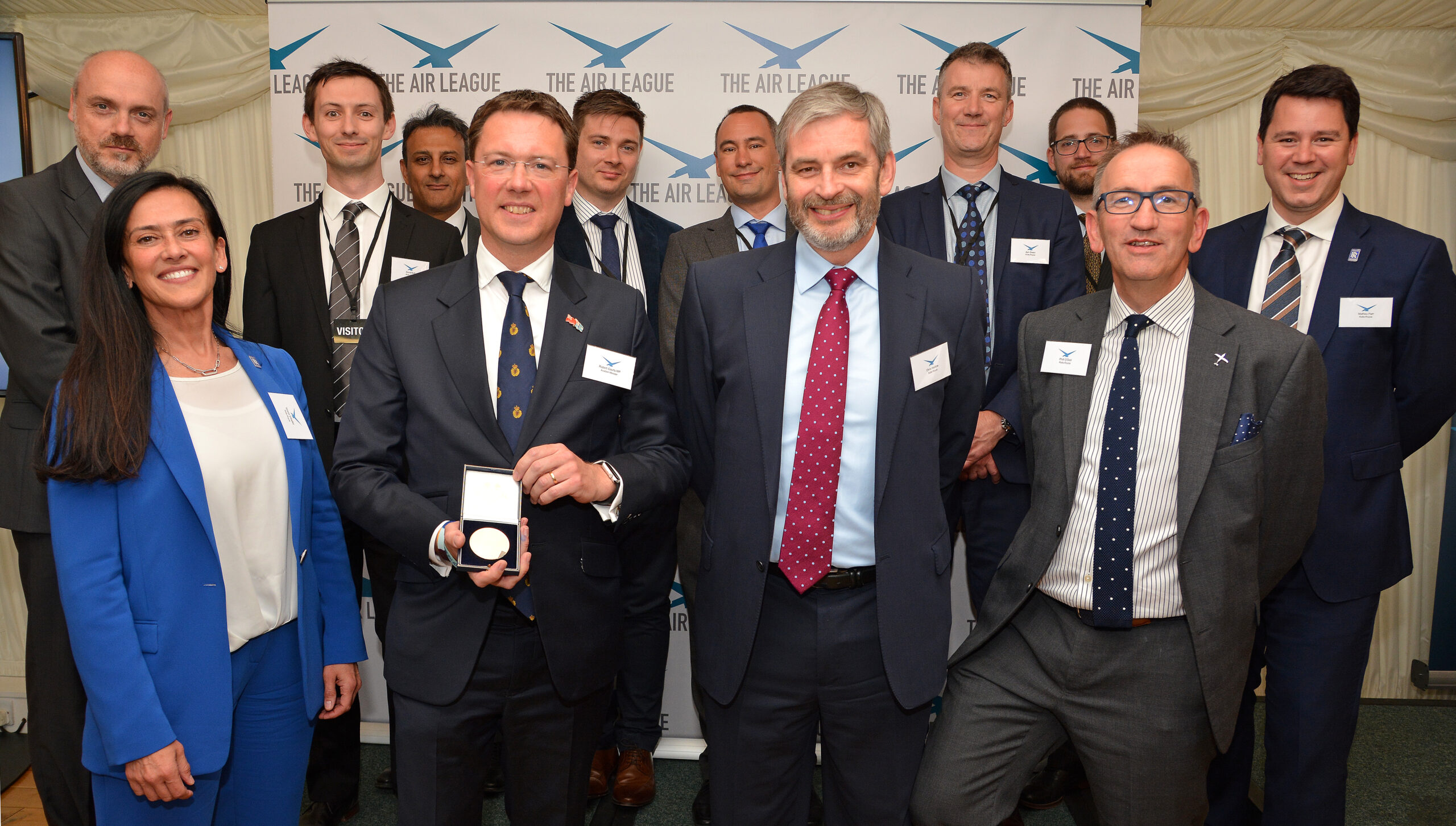 The Air League celebrates excellence in aviation, aerospace, and space

The President, Chairman and Council of the Air League are delighted to announce the recipients of the 2022 Air League honours and awards that were presented at the Palace of Westminster on Wednesday 22nd June 2022.

A number of individuals and organisations that have made an outstanding contribution to aviation, aerospace, and space in the United Kingdom were recognised for their remarkable achievements, with a series of awards presented by Aviation Minister Robert Courts MP. A tri-service rotary flypast from the Army Air Corps, Royal Air Force and Royal Navy also took place over the Palace of Westminster Terrace.

The Founders’ Medal, the Air League’s highest distinction, awarded for the most meritorious achievement in the whole field of British aviation, aerospace, and space was awarded to Rolls-Royce Plc for the pioneering technological advancements and record-breaking flights achieved by the ACCEL project. Electroflight and YASA were also acknowledged for their ground-breaking work with a framed address.

The ‘Spirit of Innovation’ is part of the ACCEL or ‘Accelerating the Electrification of Flight’ project. Half of the project’s funding is provided by the Aerospace Technology Institute (ATI), in partnership with the Department for Business, Energy & Industrial Strategy and Innovate UK.

The aircraft was propelled on its record breaking runs by a 400kW (500+hp) electric powertrain and the most power-dense propulsion battery pack ever assembled in aerospace. Rolls-Royce worked in partnership with aviation energy storage specialist Electroflight and automotive powertrain supplier YASA. As well as a stunning technical achievement, the project and world record runs provided important data for our future electric power and propulsion systems for all-electric urban air mobility and hybrid-electric commuter aircraft. The characteristics that ‘air-taxis’ require from batteries, for instance, are very similar to what was developed for the ‘Spirit of Innovation’.

“On behalf of the ACCEL team, I would like to say thank you to the Air League for the incredible honour of receiving the Founders’ medal. I would like to thank our partners Electroflight and YASA, for their collaboration and the Aerospace Technology Institute for their support in achieving this pioneering breakthrough.  Achieving the all-electric world-speed record was a fantastic achievement, that we hoped would inspire future engineers and crucially the advanced battery and propulsion technology developed for this programme has exciting applications to products that will be powering all-electric aircraft in the near future.”

Rolls-Royce has an incredible history of flying speed record attempts and breaking records, dating back to the Schneider Trophies of the early 1930s. The speed achieved by test pilot and Rolls-Royce Director of Flight Operations Phill O’Dell in the ‘Spirit of Innovation’ was more than 213.04 km/h (132 mph) faster than the previous record set by the Siemens eAircraft powered Extra 330 LE Aerobatic aircraft in 2017. Never in the history of the FAI record attempts has there been such a significant increase in speed over such a short time, highlighting the rapid pace at which electrification of aerospace is advancing.

Emma Mistry was presented the Scott-Farnie Medal to recognise her work in the field of air education. For over a decade Emma acted with the highest distinction as a representative and ambassador for the Air League, and was instrumental in the support, development and encouragement of thousands of young people who benefited from Air League scholarships, bursaries, and further opportunities.

Emma, a Royal Air Force Veteran, is someone many ex-scholars would consider as a friend. Emma’s unique empathy, kindness, and encouragement of airmindedness to the next generation demonstrates a clear dedication to the Air League’s vision of changing lives through aviation.

The Billy Deacon Search and Rescue Award Trophy which is generously sponsored by Bristow Helicopters and Breitling UK is in memory of Billy Deacon, a winchman who tragically lost his life during the rescue of the crew from the cargo ship ‘Green Lily’, which foundered and was lost on the coast of the Shetland Isles in 1997.

This award is focused on meritorious and selfless acts of courage undertaken by winchmen and women and winch operators in the aircraft of the UK and Ireland’s Search and Rescue region. The 2022 Award has been made to Winch Paramedic Abi Wild, aircrew at the Newquay Search and Rescue Helicopter Base.

Framed addresses were presented to recognise remarkable achievement within aviation, aerospace, and space. 2022 saw awards presented to David Mackay, recognising his illustrious career and endeavours in space as Virgin Galactic’s Chief Pilot, Kanchana Gamage to recognise her remarkable achievements and progress under the Aviatrix Project, and Travis Ludlow to acknowledge his achievement as the youngest pilot to fly solo around the world.